The world’s largest hybrid academic gathering in the humanities is coming to Leeds this July. 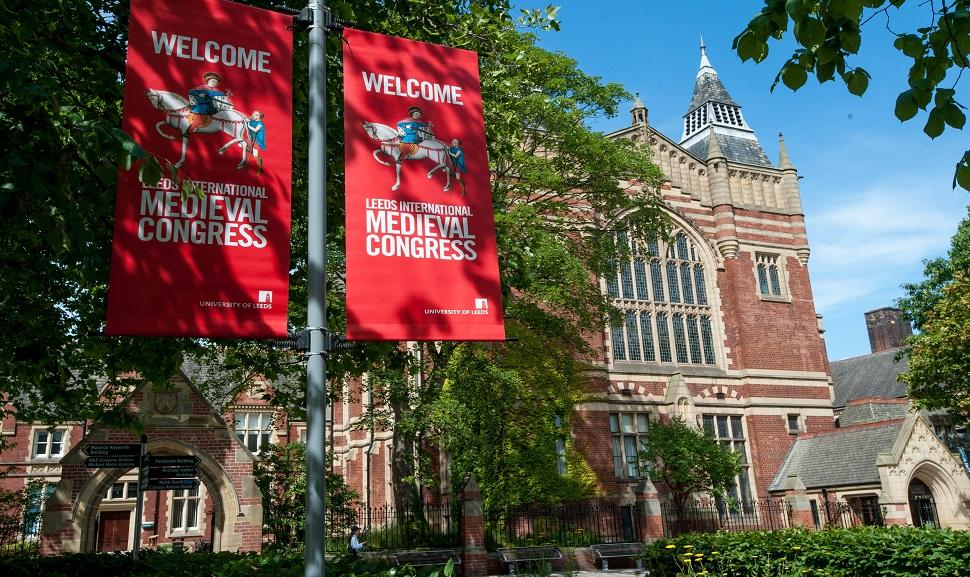 4th July 2022: The world’s largest medieval event, the International Medieval Congress 2022 (IMC) will take place on Monday 4th - Thursday 7th July and will welcome over 2,400 delegates from over 60 countries to the University of Leeds.

This landmark event will be a fully hybrid experience for the first time, with 80% of all delegates attending the event in-person and 20% logging in online. What’s more, over 66% of attendees will travel from, or take part virtually overseas, making this a truly international event.

Organised with support from MEETinLEEDS, the University of Leeds’ conference and events facilitator, this year’s IMC will focus on the theme of ‘Borders’. Attracting scholars from all over the world, the IMC is a key date in the annual academic calendar which covers all aspects of medieval studies. The event features over 600 academic sessions, making 900+ hours of recorded content.

This year’s special thematic focus on ‘Borders’ explores not only physical, geographical limits of countries and places, but also considers ideological, symbolic, and metaphorical borders - such as how these may limit community and identity.

One of the keynote speakers at the IMC, Stefan Brink, from the Institute of Northern Studies, University of Highlands and Islands, highlights how the creation of borders during the medieval period has created a ‘We and Them’ mentality, one which is still present within the current events of today. For him, medieval borders are “very much the background to the establishment of local and regional communities, which developed into politics, and eventually formed into territorial units, with more or less defined and defended borders.”

Brink’s lecture will demonstrate how this was performed in Scandinavia, and in turn, led to some of the world’s most territorially ‘stable’ states. Brink believes that, as historians, attendees at IMC 2022, must “give a perspective as to why we have borders, how they emerged, changed and developed into the present situation, and to take part in the discussion if borders still have a function in modern societies, or if it is possible to dismantle them altogether.”

“The meaning of walls has shifted over the last few centuries” says fellow keynote speaker Ryan Szpiech from the Department of Romance Languages & Literatures, University of Michigan. He argues that the meaning of borders has shifted over the last few centuries “from being a defensive or protective tool to becoming a tool of expanding sovereign state power and controlling access to economic resources. At the same time, borders are constantly shifting and being redefined, which we have seen with Brexit quickly redefining the meaning of the borders of the UK in relation to the EU.”

Szpiech also explores how the study of borders is as much about the metaphor of space as it is about the study of geography, maps, or politics. “Border thinking can produce black and white dichotomies that allow for no grey zone and that assume total uniformity within any given ‘territory’. Studying medieval borders and border thinking can illuminate both the history of political and cartographic ideas as well as our own assumptions about rational order and universal knowledge.”

Another keynote speaker, Michal Biran, from the Department of Islamic & Middle Eastern Studies at Hebrew University of Jerusalem touches on how studying medieval borders is often insightful when considering contemporary ones. Her talk at the IMC will touch on the Mongol Empire. Biran explores how “the transformative power of mobility and human migration (forced, compelled and voluntary), which has reshaped ethnic, religious and cultural borders.” She also relays back to her own experience, including the core lesson that “knowing more about those beyond the border makes them more human and less intimidating.”

Axel Muller, Director of the International Medieval Congress, commented: “We’re really excited to be hosting the very first fully hybrid IMC, as advancements in technology have allowed us to remove our own digital borders, and expand our reach to both in-person and virtual delegates.

“As we prepare to welcome over 2,400 delegates to the largest hybrid gathering in the humanities in Europe, this year’s thematic focus on ‘Borders’ will enable delegates to gather some really eye-opening insight through a range of academic sessions, excursions, performances and workshops, many of which are also open to the public. It’s fantastic that we’re able to connect with our virtual delegates, whilst also welcoming attendees back to the University of Leeds for an invaluable in-person experience.”

For more information about the IMC, please visit: www.imc.leeds.ac.uk